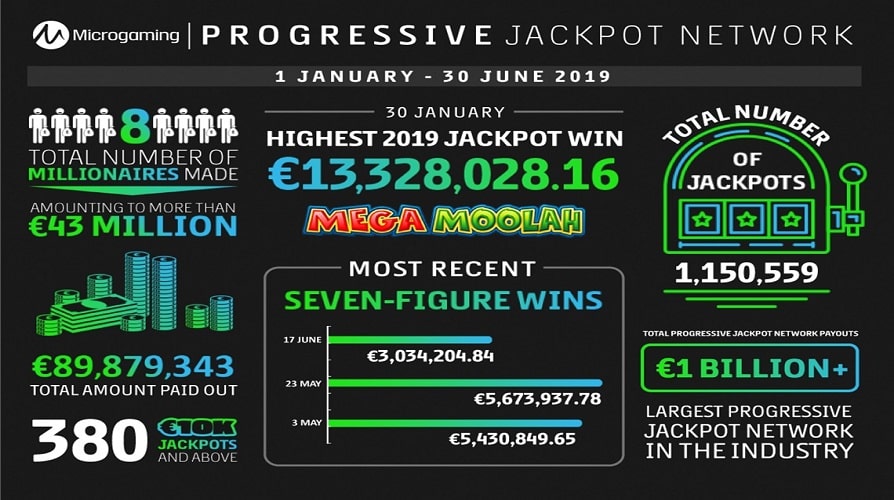 We have not yet seen the ending of 2019, and already in the first half of this year, Microgaming’s Progressive Jackpot network has paid winnings of over €89 million to some of the most luckiest online casino players. With a jaw-dropping sum of money like this, it does indeed make Microgaming’s progressive jackpot network, still the most rewarding of them all in the iGaming industry.

This network, of Progressive Jackpot games, and the staggering sum that has been won in 2019 alone, has granted Microgaming a Guinness World Record title, for the “Largest jackpot pay out in an online slot machine game”. With the amount of competition and excellent developers that are out there to try and lure in casino players, this is some title to have. This for certain, is a title that will attract a lot of attention and new players in, as they want to get their hands on a prize pool like this.

As we mentioned before, Microgaming have a Guinness World Record title for the largest jackpot pay out of an online slot machine game. Here are the records of how much, the player that got them this title, won for himself.

The highest ever jackpot prize of an online slot game was won by a customer of Grand Mondial, this particular player managed to win himself an astonishing €18,915,872! This win was claimed on one of the most popular progressive jackpot slot games in the casino industry, Mega Moolah. This win was recorded back in September 2018, and is still yet to be beaten. As you can imagine, a win like this brought a lot of popularity to the Mega Moolah online slot game, and surely a lot of casinos out there saw an increase in the amount of players logging in to experience this online slot and try and land themselves a win just like this, or even a fraction of it.

We have a slight feeling that this year, the record of the biggest jackpot ever to be won by a casino player may well be broken. Due to there being €89 million won already within 6 months of 2019, there is still a long way to go until the end of the year which means a lot of winning possibilities and a chance for there to be a new record winner. This €89 million has been won over a total of over 1 million jackpots hit. A lucky 8 players have won between 7 and 8 figure prizes, yes that millions and tens of millions! These 8 players together, have won a total of €43,000,000. Almost 400 players have claimed over €10,000 (380 players to be exact).

Now that we have established what the biggest wins of the Microgaming lifetime have been, it is time to delve a little more into the wins of 2019 so far, and see whom has come close to overtaking the current biggest jackpot winner of a casino slot. At the start of the year, back in January, sees the biggest win of the year so far. One lucky player win a value of €13,328,028, which is still at least €5 million under the current record holder, however I doubt this winner was too bothered by that.The next biggest win after came to a total jackpot prize of €11,546,388, this was won in march. Then to much surprise, not even before that winner could probably even finish counting each euro, there was a new winner. A player had managed to win €2,201,120 the day after the winner of the €11.5m! The month of march was another steep month for Microgaming as they had to pay out a total of around €13 million to 2 players, just like they did in January, except that all went to 1 winner.

After this, on record up to the end of June, there has been one more jackpot win, a value of €3,034,204. This winning has now led to there being up to 74 players made into millionaires from this network, what an easy way to make a living some would say.

A Message from Microgaming

The CEO of the developer, who goes by the name of John Coleman, has released his own statement on the mind-blowing €89 million that has been won in total from this network. He has said that 2019 could be a very special year for the network and its players. Overall in the lifetime of the network, he has revealed that the value of the rewards could reach the €1.1 billion mark.

He also said his congrats to all of the excellent players, the ones who has managed to walk away with these staggering sums of cash. He has labelled this network as the biggest in the entire industry and has predicted that there could possibly be some more life-changing wins towards the end of the year and the network are looking to deliver that.