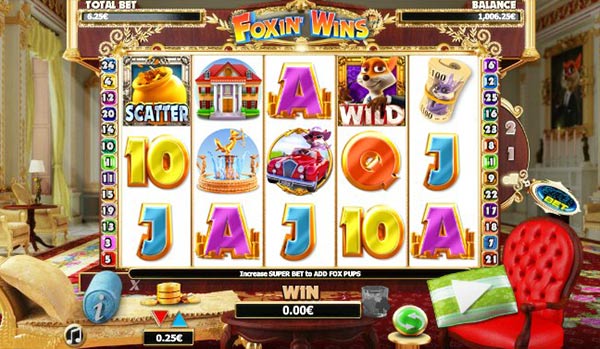 Inspired by an Aristocratic Fox, Foxin Wins slot is an animal/comedy inspired video slot created by NextGen Gaming. An invitation to the Foxes mansion is something everyone in the animal kingdom dreams about. If you are one of the lucky ones to receive one, tons of fun and winning possibilities awaits on its five reels and twenty paylines. Join Fox on his hunt to impress the Fox in the bright red race car, and he could send pots of gold your way. The pots of gold unlock bonus rounds, and before you know it, you could be 2,000 times your bet richer. This is one fox that you will look forward to seeing!

Players get a very unique opportunity to enter the animal world of the rich and famous where the wealthiest of them all is Fox. All the symbols in Foxin Wins are reminiscent of the lavish lifestyle of Fox, who does all he can to get the attention of the Fox in the Red sports car. The fox rules the world of the wealthy. Therefore he has his own currency, and his mansion is easily identified via the big red roof and the massive water fountain in the front of his home. Other symbols include the Fox dressed in pink in the red sports car, while the special symbols are the gold pot filled with coins and an exclusive portrait of Fox himself. The lower valued symbols include poker symbols cast in gold. The background offers players a view of the inside of the Fox mansion, which features high ceilings, a massive portrait of Fox, beautiful furniture, golden lamps and statues.

How to play Foxin Wins

The superbet ensures that more fox pups take part in the game and the pups can transform more symbols into wilds.  The superbet is a big part of this slot and understanding its value will help to increase win potential. There are three superbet option, and each allows for additional pups to appear on the reels, however with increase superbet level, a sidebet will accompany it and therefore increase the total amount wagered per spin. The coin values players get to select form ranges from €0.01 up to €2.00, and the maximum bet per spin with the superbet included can reach up to €50.00.

NextGen Gaming added an abundance of bonus features to ensure players get to enjoy the time spent in Fox’s company. These include wilds, scatters, superbet, free games bonus and a long list of random features including the leprechaun shakedown and fox funds.

Fox’s portrait framed in gold is the substituting wilds symbol that appears on all reels to increase chances of combination wins. It is also the most valued symbols and offers payouts once two or more appear at the same time, while the highest prize awarded via wilds are worth up to 2,000 coins.

The benefit of enabling the superbet is quite significant although superbet requires an additional bet, which is adjustable via the controls placed beside the reel-set.  With the superbet disabled the fox pup’s appearance is limited to the third reel only.  Once the superbet-I is activated, which requires an extra 35 coins, the fox pups are allowed to appear on the three centre reels, including the second, third and fourth reels. Activation of superbet-2 means the fox pups are free to appear across all reels, and the cost of activating the superbet-2 option is an additional 50 coins to your normal wager.

For Fox, everything is about winning, and a random feature could trigger at the end of any paid spin. During the leprechaun shakedown feature, it is the leprechaun you’ll cheer for. This fellow is the one whos he catches are added together and added to your bankroll, which could be worth 1,250 coins. The fox funds bonus is yet another random bonus that awards cash prizes worth up to 250 coins.

Foxin Wins is yet again proof that players experience is optimised by NextGen Gaming, due to the generous features the game ensures hours of play. As a medium volatility slot, the credits keep rolling in, and it is quite possible to enjoy spinning for many hours, without breaking the bank. The superbet option appeals to players who like to take a slightly bigger risk when the rewards are worth it, while players playing on a strict budget can still enjoy the game. Whether you accept the invitation to the Fox mansion via desktop, smartphone or tablet, just make sure you get to meet the wealthiest Fox in the animal world.