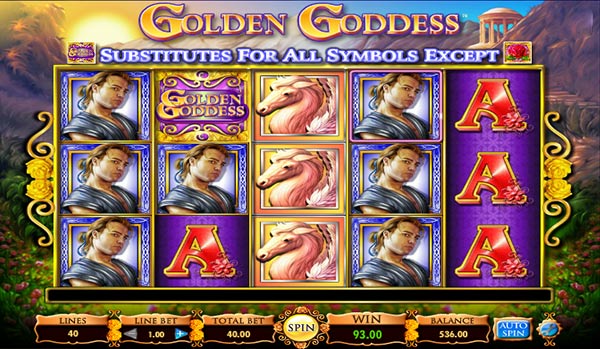 Favoured by many, the Golden Goddess is a lovely online as she has always been at land-based casinos. IGT had no choice but to create a replica of their most popular slot for online play. Golden Goddess video slot is not only available to online players but can also be enjoyed on the go via mobile devices. Inspired by a fantasy theme, Golden Goddess is one of the companies most player-friendly games. It offers both high rewards as well as enjoyable play on forty paylines hosted across fast-paced action reels. Win the favour of the Golden Goddess, and she could grant winnings worth up to 120,000 coins.

IGT’s Golden Goddess video slot features a fantasy theme. The symbols relating directly to the theme include a handsome prince, white dove delivering love letters and the golden goddess. There is a horse, Golden Goddess logo and a red rose, while the symbol collection is completed via poker symbols in a range of metallic colours. The Golden Goddess video slot is available in both a ten payline and forty payline version. Due to the absence of complicated bonus rules, it is favoured by both classic and video slot enthusiasts.

The sound effects are soft and create a calm atmosphere. However, this changes once a winning combination is achieved. This will see the volume increase and winning combinations being indicated by the same colour as the payline they appear on.

How to Play Golden Goddess Slot

Golden Goddess is one of the IGT creation that best suits both new players and those who enjoy low-risk play. Stacked symbols present in every spin ensure much higher chances of achieving payouts via combination that could award 15x or 20x the wager depending on the symbol selected. In the case of higher valued symbols, combination prizes reached more in the region of 50x the bet.

As a low volatility slot, Golden Goddess awards constantly and even though the prizes are smaller, the constant flow of payouts keep adding to players bankroll and ensure prolonged play. It is the perfect video slot for players who enjoy slot spinning for entertainment but still enjoy a generous flow of rewards.

The free spins bonus round could require you to be a little bit patient, but once it activates the rewards are well worth it. If you are prepared to wait you could walk away with substantial winnings or a jackpot.

The bonus features available in Golden Goddess slot includes wild and scatter symbols. It also includes a free spin bonus round as well as the super-stacked feature. Collectively, this ensures massive rewards once identical symbols appear stacked on three or more adjacent reels starting from the first reel.

Golden Goddess Wilds: The Golden Goddess represents the wild symbol, and once she appears on any reel, she increases the possibilities of a combination win. This is due to the wild symbol acting to replace all symbols on the reels as its role is to help form combinations that result in a win. The only symbol not part of this is the apart red rose as this is a scatter symbol and responsible for the triggering on a bonus feature.

Golden Goddess Scatters and Free Spins: Scattered red roses appear often and most of the time stacked on the second, third and fourth reels. By collecting a total of nine red roses in a single spin, the free spins bonus round activates. In exchange for nine red roses, players get the change to sit back and watch seven free spins automatically rolling into action.

Before the free spins bonus round starts, one symbol can be selected to transform into a special stacked symbol during the free spin bonus round. By selecting carefully, some exceptional wins can be achieved, especially if the symbol appears across all reels stacked at the same time.

Super Stacked Symbol Feature: Golden Goddess slot also hides another great surprise, and that is the super stacked symbol feature, which activates once you press the spin button. A random symbol is selected, and the selected symbol then appears stacked on any reel during the spin. This hugely increases the chance of bigger payouts via a combination of four or even five of a kind.

Golden Goddess slot has proven to be a favourite with land-based players and online classic slot fanatics. It is also a popular choice with video slot enthusiasts, both online and via mobile devices as its features and impressive 96.00% return to the player. This is just a little above the norm of 95%, but when it comes to playing online, the average win percentage is often far greater than that seen in a land-based casino. It is that higher percentage that pays dividends tenfold.

Golden Goddess is one of the most enjoyed video slots created by IGT. the game is most favoured for it is easy to understand game rules, user-friendliness and regular rewards. The wagering options also count in favour of the game and high rollers could wager up to 2,000 credits, and that can lead to some substantial wins. The bonus feature most enjoyed is the super stacked symbols as it activates at the start of every spin to increase the chances of winning via combinations formed by the same symbols.  The colours and graphics are another attractive feature to this game and for many, instantly recognisable online and when visiting land-based casinos.