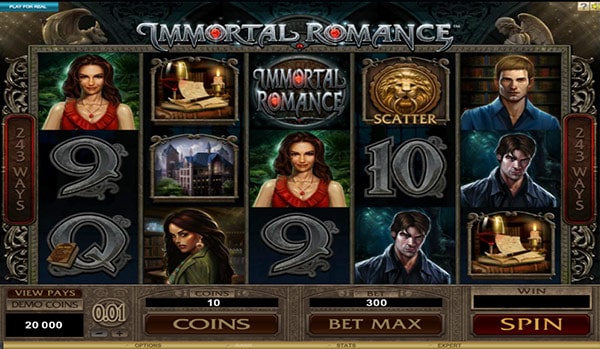 Everyone enjoys a five reel slot, but Microgaming has decided to change it up and surprise slot players with something slightly different for its time of release, a 243 payline slot. Immortal Romance is one of many Microgaming slots sporting this high number of paylines, kicking things up by a notch and making them quite exciting. The reel pattern is a swirling, metal floral gate and is combined with interactive symbols to create a compelling theme.

Created in the HTML-5 Format, Immortal Romance can be played on both mobile and desktop devices. Those interested in playing Immortal Romance but want to learn about the mechanics beforehand can do so by accessing the demo mode. Switch over to the real mode to collect large prizes.

Immortal Romance is a video slot that has surprising twists at every corner. After playing a short intro video, players are sent into the action on the base game. The intro sets up the storyline for this Clue-inspired video slot. Two women and men are put into a mansion after a mysterious murder is committed; it is up to the player to determine who committed the crime by spinning the reels. Interactive symbols like a mansion, a secret note and the four characters are mashed together with poker card symbols to reveal the various combinations this slot has to offer.

How to Play Immortal Romance Slot

Immortal Romance has become one of the most infamous slots from Microgaming in recent years; it’s a game that most players want. Newcomers or veteran players can use an autoplay mode that will let up to one hundred spins be played at a time. The conventional methods of betting are also available, letting users make wagers costing anywhere from €0.01 to €30.00.

Immortal Romance won’t just impress players with its visual persona, but it will also impress with its bonus features. There are three different wilds, bonus multipliers, bonus rounds and free spins that are accessible through the base game. Consequently, high volatility payouts will be awarded.

Scatters & Jackpot: The Golden Lion’s Head is the scatter symbol in Chamber of Spins. When all 243 bet lines are being played at the maximum bet, this lion can reveal the jackpot prize valued at $72,900.00. That is why it’s always in your favour to bet the highest amount.

Wilds: Immortal Romance is as entertaining as it gets, with the primary goal being to collect as many high valued prizes as possible. The three different wilds of this slot guarantee that those prizes will be rewarded during a spinning session.

The Chamber of Spins bonus round is activated when three of the golden lion heads appear in the base game. The four young adults will appear before you in the bonus game, by choosing one of these young adults you will initiate the free spins and bonus multipliers.

Immortal Romance is a high volatility slot that has a remarkable RTP of 96.86%. This guarantees that not only will consumers enjoy their spinning sessions, but prizes will be awarded regularly. Wagering the highest bet is beneficial for players with an RTP of this percentage.

Immortal Romance is incredible entertainment, and with some of the best graphics for Microgaming, this game is a visual feast that’s sure to please everyone. A dark theme combined with a dominating soundtrack creates an immersive environment that lets you get lost in your spinning session. Thousands of players have enjoyed the power that lies hidden beneath Immortal Romance, and for a good reason, when one considers the features it offers.