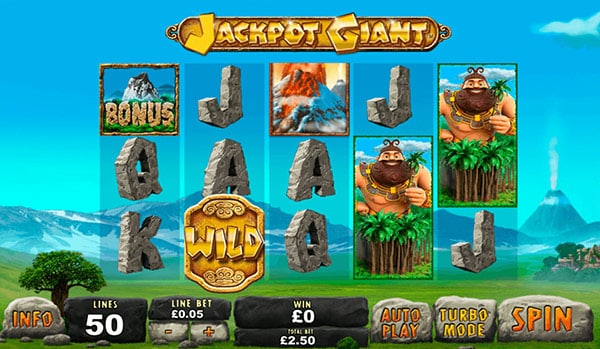 The excitement starts right off the bat when players are loaded into a vast wilderness on a tropical island, and Playtech has invited everyone to experience the opportunities of this land. It’s not often that a video slot scores 8/10, but with Jackpot Giant it is only right. Exciting sound effects and modern graphics gets everyone in the adventurer’s mood. It puts you in the right mindset to have spinning sessions that can last for hours.

Jackpot Giant is a high variance slot offering users the best of both worlds. It has a flow of regularly sized payouts that occasionally have higher rewards revealed, and it also has a progressive jackpot that is ever-expanding. The excitement can be enjoyed on a desktop or mobile platform.

Jackpot Giant, the title is a clever combination of two words used by Playtech that emphasises on the gigantic feel of the jackpot. This slot is a spinning adventure, and Playtech fans get to reap in the rewards of prizes like never before. The experience begins when you are launched into the game, where you will see the vast wilderness and the five reels displayed various symbols. Those include pink crystals, gold coins, blue crystals, two warriors, a mountain, gold coins and alphabetic rocks. These symbols are the gateway to large prizes and progressive jackpot.

Four cascading mountains fill up the sky, as a vast plain of grass beckons beneath the hills. Clouds from both the right and left side slowly approach the centre of the slot as the bright blue sky slowly dissipates over time. This background combined with interactive symbols makes for an electrifying theme that users won’t want to miss out on.

How to play Jackpot Giant

The short version of how to play Jackpot Giant merely is just launching the game and start spinning. However, it is helpful to know those hitting combinations formed on adjacent reels reward payouts and the amount paid for symbol combinations shown on its paytable. Indecently, all payout and bonus rules are clearly laid out in the paytable for review. Coin denominations start at the minimum of $0.01 and go as high as $0.08. Players can select up to fifty lines, and that will increase the size of the wager, sop for those who are budget conscious, keep that in mind when spinning the reels. Choosing the max amount will result in bets costing $4.00 each spin.

What truly makes Jackpot Giant great is the fact that the slot doesn’t even feel like a slot machine when you are playing. Instead, it feels like an adventure, and the end game is getting a cauldron of gold. Those in a rush to do something else in their day but still want the potential excitement of winning can access the autoplay option where up to 99 spins can be played at a time.

Playtech has loaded up scatters, wild symbols and a bonus round into the features of this game. Instead, you are playing the wilds or bonus round, and that gives you higher probability payouts that are increased dramatically. The same symbol activating the wild is also the symbol that enables the progressive jackpot, so keep an eye on it as a progressive win is one well worth watching out for.

Wilds: The wild is the most valuable symbol in Jackpot Giant, displayed on a golden tablet. This symbol can payout up to fifty thousand coins and also triggers the progressive jackpot. It also substitutes symbols for rewarding high-value prizes to players. The wild is activated randomly and can be played an unlimited amount of times in one spinning session.

Once the free spins have begun, prior features like the wild symbol will appear more often on the reels. This can reveal a higher percentage of cash prizes and that is where this slot holds value. Having five wilds appear across the board will end the free spins and trigger the progressive jackpot.

With all the hiking, trekking and adventuring, it is often hard to notice what the payout percentage of this slot might be. Surprisingly, those unaware would be shocked to find out that the RTP is 94.22%, and while this slot can deliver substantial wins, the RTP is below industry standards, which generally is 96%.

Jackpot Giant shows just how exhilarating an online slot can be, the unique bonus rounds and active wilds increase the level of entertainment dramatically. The addition of a progressive jackpot only furthers the excitement, drawing in players from around the globe. High probability payout ranging from $10.00 and $50,000.00 just attracts more players in over time. It is almost guaranteed that when you leave this game, you will have a higher bankroll and be happy with the time spent on. We found that this game is highly enjoyable and never lets you down; instead, it leaves you craving more.