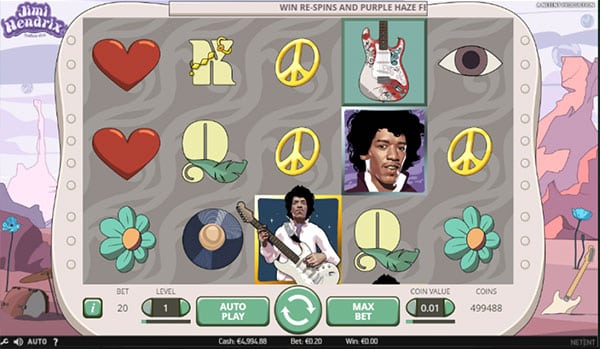 The Jimi Hendrix Slot experience is based on the life of the American rock legend, singer, guitarist and songwriter. While his career only spanned across four years, he had a massive impact on the music industry and is Hendrix is regarded as the most influential guitarist of the 20th century.

Created by NetEnt the Jimi Hendrix video slot invites players to enjoy a bit of foxy play across 20 paylines decorated via a range of symbols that reminds of the carefree flower-power era. The 5-reel slot offers an array of uniquely themed bonus features inspired by some of Jimi Hendrix’ biggest hits. While the action with the company of the guitar legend is nothing short of exceptional, it is the ita maximum payout of 80,000 coins that ensure players enjoy all Hendrix has to offer.

Created in comic style the Jimi Hendrix slot offers a pastel coloured background featuring several rocks and below musical instruments are placed in the sand. The symbols feature several different Jimi Hendrix images, several different guitars and are completed by images such as red hearts, golden peace-signs, eyes, long player records and flowers all part of the flower-power era. Brilliant animation is used to announce the activation of bonus features, while the background soundtrack includes all the most popular Jimi Hendrix hits.

Jimi Hendrix slot features 20 fixed paylines, which ensures every single spin offers the maximum winning opportunities. A wide variety of coin denominations can be selected from while the bet value can also be increased via different bet levels. Game play is carried out with use of conveniently located controls that allow for the adjusting of coin size, coins per line and auto-play options.

The prize unlocked is determined by the black loudspeakers. Players get to click on the speakers until three identical symbols are collected. Only one prize is awarded, and the corresponding feature triggers instantly.

The close-up portrait of Jimi Hendrix represents the substituting wild that can replace all symbols apart from the scatter. The wild is also one of the highest paying symbols and award up to 400x the bet once five appears on a payline.

Jimi Hendrix dressed in a white shirt represents the scatter symbol and once three appear on the 3rd, 4th and 5th reels the pick and click feature activates. There are four different prizes available, including the activation of the little wing free spins, purple haze free spins, crosstown traffic free spins or a generous coin win. The maximum coin win that can be expected from the pick and click bonus game is 6,000 coins.

The crosstown traffic free spins round consist of six free spins offering wins enhanced by the fifth reels transforming into a wild reel on spin one. Reels four and five become wild on the second spin and reels three and four are wild on the fourth spin. The first and second reels are wild during the fifth spin, and during the final spin, reel one transforms into a wild reel.

NetEnt places great importance on RNG-fair gaming, and all games are tested and certified, while the theoretical RTP of 96.90% is displayed in the game rules. Jimi Hendrix slot features 20-fixed paylines, which ensures every single spin offers the maximum winning opportunities. A wide variety of coin denominations can be selected from while the bet value can also be increased via different bet levels.

Jimi Hendrix showcased is talent in only four years. NetEnt celebrates both is talent and music by not only creating extraordinary winning opportunities but also offering online players high-quality sound and visual effects. The maximum payout offered by the Jimi Hendrix video slot is 80,000 coins, which makes enjoying his music for hours even more entertaining.