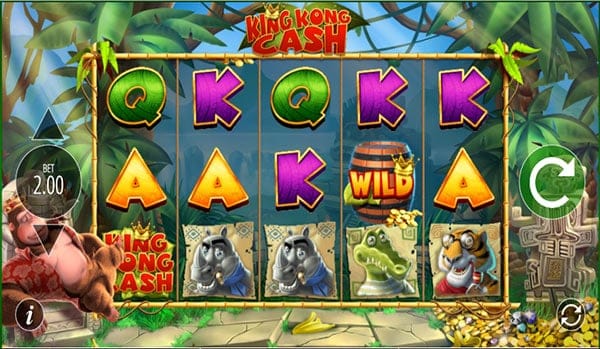 In 2005 the world met King Kong when he appeared in the epic film called King Kong, which captured the unhappy moments as he was taken away from Skull Island. New York City was not a pleasant place after years of luxury on the island. The adventure film’s budget was increased from $150 million up to $207 million. This was money well spent considering this Universal Pictures film became one of the highest grossing films of all time. It also won several Academy Awards.

Blueprint Gaming decided to visit King Kong after his return to Skull Island, where he is once again the richest king of the jungle. Heaps of gold, fruit and everything that means luxury to King Kong is available on the island situated across 20 paylines. Endless winning opportunities are further enhanced via the randomly activated sleepy Kong bonus. Several other bonus activities take place such as the Golden Barrel Super Spin, King Kong Streak, Bonus Boost, and wild Banana Cannon shoots.

King Kong Cash video slot is based on the life King Kong loves most, on Skull Island he can sit and sleep all day long on his throne. The background offers a view of the tropical island, large banana trees, the calm atmosphere and heaps of golden coins and precious gems piling up next to the walkways. It is much easier to understand why the giant Kong was never happy during his travels to the city and loves his home so much. While on the island players get to meet several other animals including the friendly tiger, smiling crocodile, parrot and rhino.

King Kong slot also offers a gamble feature activated at the conclusion of any winning spin. Additionally, the autoplay function can be used to select up to 100 automatic spins without any interaction. King Kong Cash video slot takes all budgets into consideration and accepts wagers from 0.20 up to a maximum of 500.00.

It is doubtful that any other online video slot could fit in more bonus features than what is offered in King Kong Cash. The exciting variety of features includes wilds, the King Kong bonus, golden Kong free spins, the big money bonus, empire free spins, King Kong trail, the barrel blast, and a whole range of random modifiers activated during the sleepy Kong round, including Kong re-spins, banana cannon wilds, bonus boost, King Kong streak and the golden barrel super spin.

Sleepy Kong: There are plenty of reasons to be excited once King Kong wakes up as he is bound to activate one of several bonuses, which includes one of these possible bonus features:

Banana Cannon Wilds and Re-spins: During the banana cannon wild feature, Kong shoots a banana bomb that lands on the centre reel position. When it explodes, several symbols transform into wilds. Once Kong jumps up the shaking ground causes a respin, and all wilds remain in place.

Golden Barrel Explosions: Should Kong awake during a spin, he could toss a golden barrel onto the reels, it explodes and add several more barrels, which explodes to reveal an identical symbol.

Re-Spins Part of Bonus Boost: Reels beat by Kong with a mallet also causes a re-spin during the spin streak, while a bonus spin takes place during the bonus boost.

Bonus Activation in King Kong Slot: Three or more bonus symbols unlocks the bonus rounds. There are five possible bonuses and activation depends on the spinning of the wheel. Bonuses include the barrel blast, King Kong Trail, Empire spins or the Golden Kong spins.

The empire free spins bonus takes place at the top of the Empire Building, and this interactive bonus round requires the collection of golden monkeys in order to move to the next reel set. Golden Kong free spins take place on a 40 payline 5 x 4 reels format and are boosted via special wilds and a series of wild spins.

Trail Bonus Round in King Kong Slot: The barrel blast bonus shows several barrels across the screen. The player selects barrels to find out what is hidden inside each. Gathering three of the golden monkeys  triggers the King Kong Cash BIG MONKEY bonus. The first stage is a multiplier trail, while the BIG MONKEY bonus is the second stage. This is a big money game, and bonus boost are offered via bonus wins, barrel respins, top multipliers and golden monkeys.

The trial bonus starts on the trail, players start at stage 1 and select barrels to advance to stage 3, 4 and 5. Only the golden monkey has the power to unlock the BIG MONKEY bonus round and should players discover the bomb at any stage the bonus round comes to an end.

King Kong Cash video slot’s design is an amazing game. The drum-heavy background sounds offer a great tempo to the game and with tons of bonus features, there is simply never a dull moment during play. The massive range of additional winning possibilities ensures exceptional entertainment. Everything about this Blueprint Gaming creation screams high-quality, interesting play and the game is highly recommended for anyone from new players to the most experienced slot enthusiast.