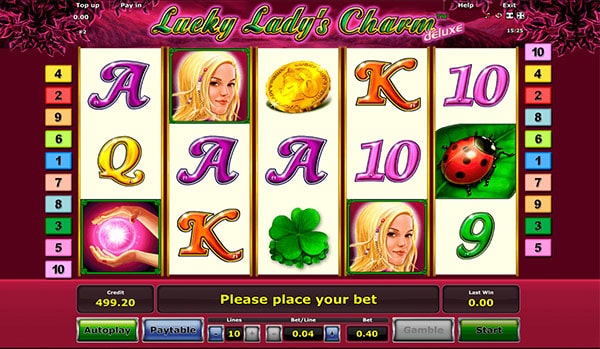 Lucky Lady Charms is one of the more interesting video slots, surviving for more than a decade. This game has been played by millions and still impresses to this day. Created by Novomatic, this game is designed to provide players with a winning experience that is themed around the fantasy character of Irish elves. Lucky Lady Charms takes players on an adventurous journey that can lead to high payouts.

There are four bonus features present to keep the reels spinning in an exciting fashion. Many have told tales of winning large prizes as a result of these features due to the number of payout in this slot over the years.

Lucky Lady Charms is now referred to as the high probability slot. It currently holds a staggering amount of payouts and that is what keeps it an attractive option for those who love slots. Classic in many of its design elements, its features are designed not only to entice, but to provide extended gaming sessions courtesy of its free spins.

Novomatic’s elvish friends live deep in the woods under a low-setting pink set that gives a pinkish hue over the slot; it’s these woods that act as the background for this slot. Animals, Elves and magical powers greet players when it is time to enter the woods. Seeing the variety of elvish culture makes this game magnificently entertaining, and that only adds to the overall appeal of its theme and design, both colourful and creative in nature.

Many of today’s slots have become far more complicated and encompass multiple screens; this isn’t the case with Lucky Lady Charms. Instead of catering to those accustomed to the challenges of a video game. Novomatic has created a slot that focuses on the emphasis of classic video slots. This lets players jump right into the action and avoid any distractions in the process. Playing across ten paylines and five reels, the theme and symbols make for exciting gameplay.

Since Lucky Lady Charms is centred on elvish culture, the symbols of the game reflect that culture perfectly. Symbols like a female elf, a ladybug, lucky charms, coins, crystals and horseshoes cascade over the reels to reveal high payouts. Using visually appealing graphics, the symbols almost pop right out of the screen and help to create an immersive environment. The top paying symbol is the female elf at 9,000 coins and she is one to keep watch for.

How to Play Lucky Lady Charms

Lucky Lady Charms, created by Novomatic, favours higher bets, and this elf-themed slot is no different. Using two methods in the betting selection will let users change their bet from €1.00 to €10.00. Playing at the highest bet will increase probabilities at winning the jackpot of €90,000.00. Regardless though, no matter what your play style is, an exciting and worthwhile game awaits. Once you see the capabilities of winning, you will want to increase your bets.

Lucky Lady Charms feature’s not only wilds but also free spins, bonus multipliers and scatters. Each bonus feature is designed to increase the user’s chances at winning large scale prizes. All of these features are awarded at random.

Wilds: The elf portrays wilds in Lucky Lady Charms. She not only leads to the highest prize of nine thousand coins but she also increases payout chances by replacing symbols. The wild is triggered randomly and can be activated countless times.

Lucky Lady Charms Scatters: Lucky Lady Charms leads players to their bonus features through the scatter symbol. Designed as a mystical pink orb, the scatter can take players to free spins and bonus multipliers. This symbol is also the second highest paying in the game, awarding players with upwards of $50,000.00. The free spins appear randomly, and it takes three of them appearing on the reels to award the free spins and multipliers.

Lucky Lady Charms Free Spins & Multipliers: The bonus multiplier and free spins round are triggered when three of the pink orbs are displayed on the game screen. This will initiate fifteen free spins that are accompanied by a 3x bonus multiplier. During the free spins, the female elf will become a more regularly seen symbol.

Five of the elves appearing would guarantee a prize maxed out at €270,000.00. This can only be awarded when the max bet is at play. It is due to these two features that the game has remained loved by millions and is still accessed today more than a decade after its initial release. Life changing payouts are plausible through the bonus round of Lucky Lady Charms.

Most of the recent significant payouts took place over desktop devices, meaning that Lucky Lady Charms remains queen for desktop consumers. Running at an RTP of 95.13% this isn’t shocking as it’s an impressive RTP that has kept players coming back. While average when compared to many of the internet’s top slots, it is still well within the range that is seen as acceptable.

Lucky Lady Charms is a highly entertaining slot for both men and women, whether you are playing the main game of the bonus features. The graphics, more than a decade old still hold up, as do the sound effects. Chances of winning huge rewards have let this Novomatic slot become infamous in the world of online slot players and that stands true today, and often contributes to a games longevity in so far as only casinos keeping it part of their game library.

The game offers plenty of features and exciting moments that will keep players interested and excited. Consequently, this isn’t a slot you want to miss out on.