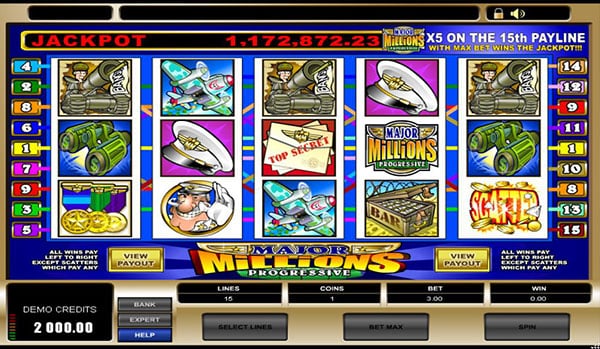 Everyone enjoys five reel video slots, Microgaming for more than a decade has surprised millions of fans with something extraordinary. Major Millions shakes things up in quite a unique and exciting way. The reel pattern is the one commonly seen, with cascading numbers and lines that keep participants in the action. Paylines count, moving players closer to the progressive jackpot or high probability payouts of this slot.

Created in an HTML-Format, Major Millions is available for both mobile and desktop play. Those interested in this slot can enjoy the magnificent, but slightly outdated graphics and learn everything there is to know about the slots mechanics in demo mode. What is important to remember is that this slot was originally released nearly a decade ago and therefore was designed as a classic slot. It is slots such as this that often carry exceptional value due to the lower number of symbols appearing on its reels.

Major Millions offers a surprisingly enjoyable twist on the exotic and lavish lifestyle; after a short intro video, it is off to the races. The opening screen transitions into the game screen where the paylines, symbols and progressive jackpot will be visible.

The Billionaire boat captain is the character behind this slot; he remains as the highest paying symbol outside of the wild. Iconic music themed around a billionaire’s lifestyle is heard in the background, as are iconic slot sounds with each spin or win. The collection of symbols include a yacht, the captain, a plane, a tank, top-secret letters, a captains hat, binoculars, a treasure chest and a game logo.

How to Play Major Millions Slot:

Major Millions is probably one of the most loved video slots played around the globe. Though there is an autoplay feature, it’s best to play this game direct. Players can select paylines individually at a denomination of their choosing or simply hit max bet. Hitting max bet will better your chances at hitting the wilds, multipliers or progressive jackpot. Using the autoplay feature could result in you missing out on the wilds or worse, the jackpot.

Major Millions doesn’t just offer graphics that a decade later are still impressive, but it also offers bonus features that are more compelling than most on the market today. The wilds and multipliers are built into the same symbol, the game logo. Through the symbol, the progressive jackpot is also attainable.

The Progressive Jackpot: Major Millions is a progressive jackpot that is networked between thousands of online games that offer this game in their library. This creates an ever-expanding jackpot that is maxed out at $2 million. It takes an average of 6 weekends for the jackpot to reach the max away. Winning this amount requires wagering the $3.00 max bet.

The progressive jackpot is the goal for everyone who plays this slot. The Major Millions game logo is the key to winning the jackpot. Five of these symbols have to appear on the 15th payline for the jackpot to be won. Once the jackpot is rewarded, it drops back down to $0.00.00.

Multiplier Wilds: The game logo is the golden symbol of Major Millions. The primary goal of this slot is to achieve as many of those symbols as you can. Five of these symbols on any payline other than the 15th will award 8,000 coins. The game logo can also award wilds that will randomly be placed on paylines. A 3x Multiplier triples any wins that are awarded through these wilds.

Scatters: Scatters in Major Millions can be tripled by a hidden 3x to 50x multiplier. When three multiplier symbols appear, one of the three multipliers will be revealed. Landing on the captain while this multiplier is active can reveal prizes worth $1,600.00 or more.

Expert Mode: Expert mode is a hidden feature in Major Millions that players need to be aware of. You can switch the game into expect mode which initiates new features into the game, including Autoplay. Through this feature, you can allow for the reels to continually spin for a desired number of spins.

There is a mobile variant of this slot machine. Due to the nature of the older graphics, even the oldest of smartphone devices can run this slot. The mobile version operates differently than its desktop variant, with expert mode always active. The progressive jackpot is the same amount as the desktop variant of Major Millions.

Major Millions is a high-velocity slot machine that offers remarkable payouts. Consequently, the payout percentage is only 89% to even the playing board. This RTP is still higher than any that would be seen at a brick and mortar casino.

Major Millions is a highly entertaining slot, and with so much exciting things going on, its gameplay draws you into the experience as no other slot can. The Captain and his luxurious life that appears from reel to reel make the anticipation of winning the jackpot that much more powerful. The betting options suit the needs of any player, with thousands of people visiting this slot every single day.

Most of these players return daily to get their hands on one of the best slots to ever be released by Microgaming. It has been a dominant force in the industry for more than a decade and for anybody who hasn’t played this slot before, they shouldn’t wait any longer. The power of classic slots is often forgotten, however, should not be as they have equal, if not more winning abilities in so far as the amount that newer more complicated video slots.