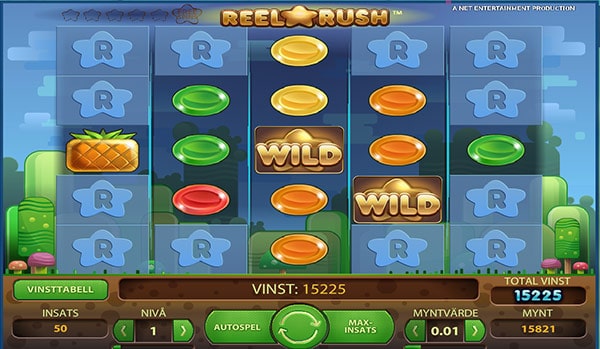 Live for an adrenalin rush? The Reel Rush was created by the masters of 3D creations, the multi-award winners who grab most rewards for game of the year and the masterminds when it comes to RNG-fair gaming. Reel Rush video slot is one of the most exciting multi-way winning video slots part of the exceptional selection created by NetEnt.

A unique blend of row and reels configuration offers players more ways to win than ever thought possible before and with 3,125 ways to win, how it could not be a real Reel Rush towards winnings worth 480,000 coins. Ultimately, it is the big wins that give the greatest rush, and in this NetEnt creation, that is exactly what this game delivers.

Described by many as a slot that comes to life via its sound, it might be best to turn the volume up to enjoy the combination of animations perfectly coordinated with the sound effects. For some players, it might be a dream come true as it reminds of the combination forming action of Candy Crush, for others opening up more ways to win is something both unique and attention-grabbing.

NetEnt invite everyone ready to accept a sweet deal to enjoy massive rewards offered in a wonderland where the trees resemble ice-cream-lollies and the stars go wild.  Reel Rush video slot is all about a winning feel that resembles a sugar-rush as a combination of three or more candies award impressive rewards.

How to Play Reel Rush Slot

Reel Rush is a 5 reel slot that features one of the most ingenious re-spin-free-spin features, in order to enjoy the full benefits of 3,125 ways to win in the free spins bonus round. The player needs to unlock several re-spins.

The sound effects are perfectly in sync with the building of excitement as more and more ways to win unlock from just 45 ways to win growing all the way to 3,125. Reel Rush features no paylines and therefore the bet level can be set via the level selector once the coin value is selected. To start a spin at the highest bet level it is easiest to use the max bet key.

Reel Rush video slot features one of the most exciting free spins bonus round and additional winning opportunities are offered via wilds and up to five re-spins. This gives the golden opportunity to unlock more ways to win with every spin and it can result in some substantial paydays to say the least.

Reel Rush Wilds: The chubby little gold star in the wild, which appears exclusively on the second, third, fourth and fifth reels during both the free spins bonus round and the main game. It replaces all symbols to increase payouts via combinations.

Reel Rush Slot Re-Spins and Free Spins: A successful combination during the base game activates 1 re-spin up to a maximum of 5 re-spins should more combination occur during the re-spins. During each of the re-spin, the number of ways to win continues to increase via two extra symbols appearing on the reels.

It is one of the only video slots that combines the re-spins and free spins bonus rounds into one powerful winning session. The Reel Rush free spin bonus round is activated via the fifth re-spin and once active awards 8 free spins. During the free spins, bonus round players have 3,125 ways to win available in every single spin.

With a high RTP of 97.00%, Reel Rush slot is one of the most high-roller favoured video slots due to its exceptionally high betting level. Reel Rush offers ten bet levels as well as five-coin values to select from. The coin values start from €0.01 up to €0.20 and the maximum bet per spin is €500.

Reel Rush is one of the most innovative online video slots and the non-traditional approach used by NetEnt appeals to thousands of players from around the globe. It remains one of the most amazing slot designs and the creative concept is loved by both online and mobile players. Reel Rush is available in fun play, allowing players to enjoy the graphics without risking any money, although the real excitement is offered via the real money mode when it becomes possible to enjoy massive payouts worth up to 480,000 coins.