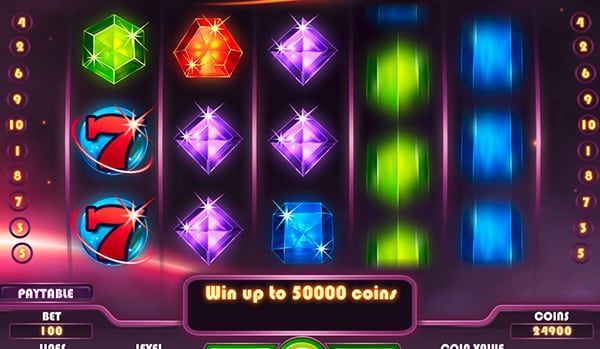 Gem bursting online games inspired Starburst video slot, which became the most popular online slot. No other online slot is used in as many online promotions, and bonus offers as Starburst and it all with good reason. NetEnt took gem bursting to a whole new level as they reached to the stars for inspiration. That saw them base Starburst video slot on the exceptional starburst-phase that takes place during close encounters between galaxies.

Inspired by an astrophysical process, Starburst is a five reel video slot featuring three rows and payouts are awarded both ways. Due to its uncomplicated game rules, the game is hugely favoured by players both enjoy classic slots, as well as video slot players. It features an astronomical top prize worth up to 50,000 coins.

Starburst video slots background offers an openness that represents the endless universe. The reels offer the idea of a large drum spinning, divided into five by purple lines, while the payline numbers appear on both the left and right side. The symbols combine the brilliance of gems in different shapes such as an orange hexagon, royal blue colours octagons, gold pentagons and purple squares in purple. The collection is completed by a golden universe marked Bar and a blue planet identified via a red seven. Once three or more identical gems align on a payline that runs left to right or right to left, combos animations resemble that of bright shining stars.

How to Play Starburst Video Slot

Created by NetEnt the game is available at most top online casinos, while it caters for all player budgetary need via ten different betting levels. The golden bar symbol awards up to a maximum of 250 coins while the red seven pays up to 120x the activation bet. The coin payouts are based on the bet level, and only the highest win per payline is rewarded. These are paid left to right or right to left and start from the most left or most right reel. Starburst is a win-both-ways video slot enabling players to win up to 50,000 coins.

Due to Starburst video slots immense popularity, it may come as a huge surprise that it does not offer a whole list of bonus features. NetEnt created this masterpiece by carefully planning the game. Winnings are awarded from either the first reel on the left side or the last reel on the right side once three or more identical symbols appear on adjacent reels. With winnings awarded when succession forms from both the rightmost to the leftmost and left to rightmost reels, players enjoy doubled chances of achieving prizes.

Starburst slot’s wild symbol is a star that features multiple gems, and the wild can substitute for every single symbol. The wild symbol appears exclusively on the first, third and fourth reels, and while a basic wild in so far as it doesn’t include a multiplier, it does trigger re-spins and additional win opportunities.

One, two or more wilds landing on the first, third or fourth reels activates the Starburst slot wild feature. During the wild feature, the star-shaped wilds expand to cover the entire reel. The wild reel remains in place during a free re-spin. Should any additional wilds land during the re-spins feature it remains in place, expands and joins any previously expanded wilds for another free re-spin.

Starburst is available on free or demo play and mimics real money play. The only difference is that the demo game will not offer a gaming history. Both real and fun play offer an auto play function and players can select up to 1,000 spins. This is a great way to enjoy the truly impressive graphics and to learn all about the power of the expanding wilds.

Starburst offers an impressively high theoretical return to player of 96.1% and due to its regular payouts remain one of the most-loved online slots. Created by NetEnt the game is available at most top online casinos, while it caters for all player budgetary need via ten different betting levels.

Starburst video slot is equally popular on desktops and mobile devices such as tablets, smartphones, iPhone and iPad. Due to its design and features, the game is easy enough to be enjoyed by beginners, and it’s potential, but also by high rollers, mainly for the same reason. The betting range is quite extensive and caters to all play levels, and that in itself has been instrumental in its success as has its classic slot design elements as experience slot players know, often it is the slots with less glitz and glamour that often pay the best.

Excellent sound effects combined with high-quality visuals is the winning recipe and are topped by the fact that winnings are rewarded left to right and vice versa. Starburst is indeed a radiant little star amongst thousands of online slots, and one of the more popular slots offered by NetEnt. It is also one that many online casinos favour when awarding free spins as part of a welcome bonus due to its overall winning nature and intense animations.