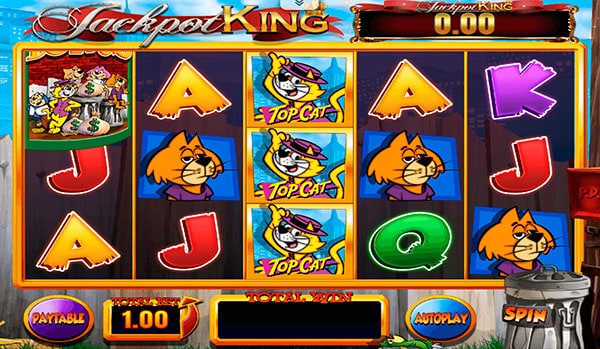 Inspired by the televised cartoon, Top Cat is a five reel video slot featuring twenty paylines. It aims to replicate the original setting that ensured that the program enjoyed massive popularity. Blueprint Gaming masterfully re-creates the Hanna-Barbera cartoon from the 1960s and re-visits some of the scenes previously part of the series. The reel version enables players to re-connect with Spook, Brian, Benny and Choo, partake in their gang events and enjoy huge rewards from their plan on how to gain access to massive payouts.

It’s behind the wooden fence where the dustbins are kept where the gang meets up to discuss several master plans in Top Cat video slot. The view in the background shows many skyscrapers and hundreds of little windows more visible via their lights indicates that it is getting dark. All the bonus rounds are based on Top Cat and his team, which started when a group of alley cats from Manhattan wanted to outsmart Dibble, the police officer. The main characters include Spook, Fancy-Fancy, Choo-Choo, Benny the Ball, Brain and Top Cat, while the high card symbols represent the lower values.

How to Play Top Cat Slot

Top Cat is a video slot offering an incredible selection of exciting bonus features, and all combination payouts are awarded for combinations from left to right. Top Cat loves to surprise players, and when suddenly appearing from a trash can, he talks to one of the crew and then activates one of four bonus rounds.

Top Cat video slot features a fantastic range of exciting bonus features including wilds, scatters, super stackers, and the masterplan, consisting of five excellent bonus rounds. The player gets to choose the best plan form the five the gang came up with and should you select right the reward could be enormous.

Top Cat Wilds: The fishbone left behind on the plate is the wild symbol. It stands in for all the other symbols excluding the bag of cash symbols, which in this slot represent the scatter.

Top Cat Scatters: The photo taken of the group posing with bags of cash represents the scatter symbol. Three or more of the photographs on the first, third and fifth reels activates the master plan bonus. This offers access to the noticeboard where one of five plans can be selected.

The Master Plan Bonuses: The Cash picker bonus plan advises the player to continue picking bins in search of massive multipliers until such time as Dibble arrives to end this plan.

The Maharajah heist plan is all about participating in a trial game that consists of two stages, the prizes include either cash prizes or multipliers

The diner free spins plan instructs the player to collect as many wilds as possible on special reels in order to advance to the reel set that is more lucrative.

Dibble’s plan is all about free spins enhanced via additional wild symbols.

The construction site plan includes wilds as well as an unlimited amount of free spins that continues until at least five meal tickets are collected.

Randomly Triggered Bonuses During Main Game: Top Cat slot offers four randomly activated bonuses. These can trigger at any time during the main game and include the following:

In the Spook’s bonus round called mice is nice, several mice arrive on the reels. They will then rearrange the symbols to guarantee a win and can undertake this rearranging process more than once.

During Brian’s water wilds round, he places several fire hydrants under the reels, with some luck all of these do transform into wild reels.

In Benny’s colossal TV round, he adds TVs and these chances channels to portray random symbols.

Piano wilds are the choice for Choo, in this round he randomly adds extra wilds onto the reels.

Hot Dog Respins by Fancy-Fancy: The hot dog wild will appear on the fifth reel and cover three positions on the reel once it lands in full view. A re-spin then takes place during which the vendor appears and places his cart also on reel five to encase the wild hot dog. The crew together with Fancy Fancy arrives armed with the fishing rod. This causes the re-spin, and the hot dog continues to shift one reel to the left at a time. This continues until it disappears off the left side of the reels.

Top Cat Slot tells the tale behind the alley cats that thought they could run wild in Manhattan and sidestep officer Dibble. While it is one of the most enjoyable titles by Blueprint Gaming, it also impresses with a 95,493% RTP.

Top Cat video slot created by Blueprint Gaming is linked to the jackpot king progressive jackpot, which is activated by five jackpot symbols. Once triggered the jackpot bonus round is played. The goal is to collect as many crowns as possible before the end of the spin. A win on the wheel of fortune is granted once a minimum of fifteen crowns are collected during which the jackpot can be won.

Top Cat slot is bursting with bonus features that are as exciting as rewarding and exciting. The well-crafted cartoon-theme offers colourful graphics that further enhance the experience for the player. Top cat and his crew simply never fail to entertain the player as a result of several surprise bonus actions. It also includes the chance to win the jackpot king Progressive jackpot.